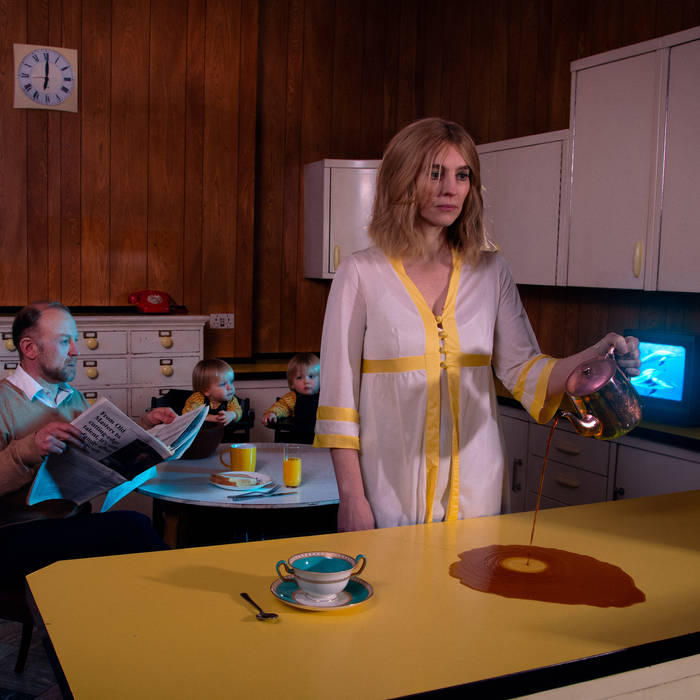 The debut album from Soda Blonde may be called Small Talk, but if there’s one thing the Dubliners do not do, it’s mince words. Out July 9th via Velveteen Records, the entirely self-produced album sees the group reflecting on their twenty-something experiences with refreshingly honest transparency.

“To put it simply, Small Talk is about life in our 20’s,” says Faye O’Rourke, Soda Blonde’s enigmatic front woman. “Every part of us is in here, both subliminally and literally. Lyrically, this record is like a collection of my flaws and insecurities. They’re lingering awkwardly by the bar at a crowded social gathering, waiting to integrate with the wider world”.

The album’s titular lead single is Soda Blonde’s way of taking a seat at the table of their own narrative, and its glittering alt-pop hooks present the foursome as a compelling collective voice in music.

All four band members (O’Rourke, guitarist Adam O’Regan, drummer Dylan Lynch and bassist Donagh Seaver-O’Leary) are seasoned musicians, despite their youth. They have been playing together since their early teens, with their previous band – the internationally renowned Little Green Cars, whose seminal debut album skyrocketed to number one on the Irish album charts. O’Rourke is the first to admit that when Little Green Cars called it a day, she felt lost. But a career shift for the four musicians wasn’t in the cards – and Small Talk is self-evident proof, different than anything the group have released before, but carrying on its back all the things they’ve learned.

Wholly unafraid to admit her flaws and defiant in the face of the world’s misconceptions, O’Rourke litters the songs on Small Talk with tension, playing with the reliability of personal experience. While examining the intricacies of big subjects – religion versus science; good versus bad; fate versus choice – Small Talk also seeks to unpack O’Rourke’s own conditioning. Self-assuredness grapples with societal pressures, anger battles it out with contentment, and frustration with a divide – between personal relationships and the world at large – is ever-present.

“With feminism on one shoulder and trans-generational Catholic guilt on the other, it’s hard to find your way as an Irish woman,” O’Rourke says. “The truth is, I’ve found that process of deprogramming myself extremely hard, and now I lie somewhere between the past and future.

“Small Talk touches on many things: indulging in the darkness, while also trying to derive some meaning from it; on having no degree; on the way I sabotaged multiple relationships, or let my parents down. It’s about looking for resolution and revolution in sex and politics. It’s about being abused mentally and physically by the people you love the most, and in turn, abusing the people who love you. It’s about my first heartbreak at 14, how it’s still intrinsically a part of me and the shame and embarrassment that it brings. It’s about having something you thought was a sure thing, like your career, ripped out from underneath you. It’s also about the idea of optical virtue over the reality of how we treat those around us”.

Through all of this, the band never claim to be role models. Undeniably a coming-of-age record, Small Talk is a dazzling portrait of someone who isn’t afraid to hold the messy parts of herself up for questioning. Between tightly stacked percussion and effervescent, radio-ready melodies sit plain-spoken truths and the hard-learned lessons of a group still at the start of what is sure to be a long journey.

MASTERED BY AIDAN MCGOVERN AT ACADEMY OF SOUND

ALL SONGS BY FAYE O’ROURKE

Soda Blonde are an alt-pop band from Dublin, Ireland.

Bandcamp Daily  your guide to the world of Bandcamp

Featured sounds from Fly Lo and Ahmed Idris, plus Mother Nature hops on to drop off new project